Situation: Baltimore was the first new temporary street track in North America since 2003. And the first in the center of a major city since 1990. The Baltimore track is set in the heart of downtown and encompasses major highways, businesses, hotels, restaurants, a Convention Center and Oriole Park at Camden Yards…all within the race track. Immediately outside the track are residential neighborhoods, more business and the Maryland Shock Trauma Center. Plans had to be developed to make sure all those affected by the event could function during construction, race weekend and the teardown.

Our Role: MCS was retained in the summer of 2008 to help develop budgets and economic impact studies, we made presentations to the City, State, businesses organizations and residents groups, resulting in the City signing a 5 year contract with the promoter to bring international motor-racing to the streets of Baltimore. MCS designed the track layout and master site plan.

For the Baltimore Grand Prix we forged close working relationships with all agencies, developing plans to insure any disruption to the City’s day-to-day operation was kept to a minimum.

The planning phase took three years, the last year almost full time. By August of 2011 we were ready to begin construction. MCS coordinated all the vendors to make sure the “city” we were building within the City of Baltimore, went in as smoothly as possible. 2200 race walls (with a total combined weight of 20,000,000 pounds), 2200 sections of race fence, 65,000’ of temporary spectator fence, 30,000 grandstand seats, electrical generation and distribution, sanitary systems, solid waste collection and disposal, television cameras and 6 miles of cable for the communications networks were just some of the tasks we accomplished in the 40 days it took to build the facility.

MCS also devised the plans to pave over the downtown Light Rail tracks, in 8 hours (finishing the paving the day before the race), run a race on the new asphalt, and remove all the new paving after the race and reopen the Light Rail by 11:00AM the day after the race

The result: Regarded as the most successful inaugural street event ever, with an estimate three-day attendance of 175,000.

Feedback from press, drivers and fans…

“The Izod IndyCar Series is batting 1.000 in Baltimore after the most successful inaugural American street racing event in the past 30 years.”

“This feels like one of my best wins,” he said. “The atmosphere — this is the best podium ceremony I’ve ever had in my career — massive! So many people. On my cool-down lap, I looked at every stand, absolutely full. They put on the best race we have had all year, really impressed, really impressed”.

“The Baltimore Grand Prix already has jumped to No. 2 on IndyCar’s road racing hit parade, right behind the venerable 37-year-old Toyota Grand Prix of Long Beach and ahead of Mid-Ohio, Toronto and St. Petersburg.”

“It’s unbelievable,” third-place finisher Kanaan said. “I’ve never been in a place where it was this crowded and the fans were so passionate. Back in Brazil it’s kind of like that, but yesterday night I’m walking to have dinner and it took me 45 minutes to walk four blocks because everybody was stopping me, taking pictures.”

“For three decades, street races from the Meadowlands to Miami have been jockeying to call themselves the “Long Beach of the East…and in the Baltimore Grand Prix, it looks like INDYCAR finally found one that deserves that crown.”

“Roger Penske looked out his window in the Hyatt Hotel at the Inner Harbor and didn’t believe was he was seeing…It was Saturday and the grandstands along the Baltimore Grand Prix course were packed solid with fans…”I was amazed at the turnout,” said the owner of Team Penske. “To see huge crowds like that on a Friday and a Saturday shows this event has great potential.”

“The skycap at the airport even said that he took his kids on someone else’s advice, and built memories for years to come. He is not a race fan—and plans on attending EVERY year. Every driver I have spoken to said you knocked it out of the park and the crowd inspired them to give it their best. Victory Lane was practically a mosh pit—and frankly, bigger than the Indianapolis 500” 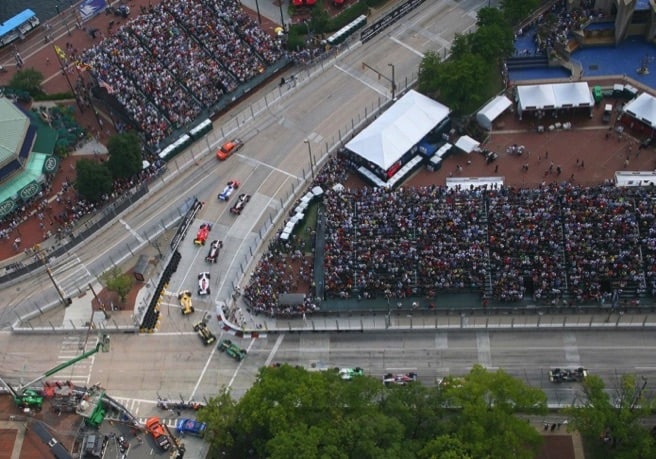