Although Hyperdrive is just one of several projects we have worked on recently, it was so big, took so long, and was so epic, that I decided to give it its own section within the site.

In December of 2016 I received a phone call from a production company in west Hollywood, they explained to me that they had just sold a car show to Netflix and would I be interested in chatting with the executive producer about designing some courses for the show. Of course the answer was yes. They went on to explain the concept…American Ninja Warrior meets Fast and Furious…and it was!

2 months later, after many phone calls, I was in a conference room with producers, stunt coordinators, camera, lighting and production people. We spent 2 days throwing ideas out while a story board artist drew our ideas. When I got home after 2 days of random thoughts that usually started with ”wouldn’t it be cool if…..”, I told my wife “that was the easiest money I ever made, these people are bat-s••t crazy and I will never hear from them again”…2 years later, in July and August of 2018 we were in Rochester NY building and shooting the show.

If you have not seen the show, this will take you to the trailer on Netflix – Hyperdrive

Just a few of the articles written about MCS' work on the Netflix series Hyperdrive... 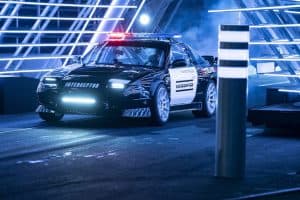 Imagining an unlikely (but spectacular) amalgam of three diverse cultural icons – NASCAR, Blade Runner, and American Ninja Warrior ­– is a good start. Ensuring that the inherent dangers (for both contestant and crew) of a show with vehicles traveling more than 90 mph are minimized and/or nearly eliminated is another road down which this one-of-a-kind unscripted show travels. 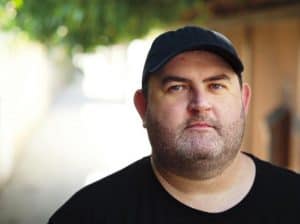 With a set that covered more than 100 acres and a pre-production process that involved laying some five miles of cable, the physical logistics were daunting enough. But Catling also points to Hyperdrive’s car-racing based world as a true narrative challenge. 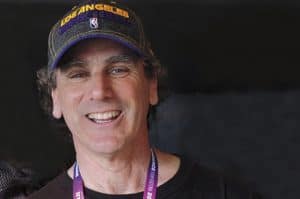 Hyperdrive had an amazing safety record – not a single incident despite the high potential for serious injury. Or as track designer and safety advisor Martyn Thake (a man who oversaw safety for the televised IndyCar racing series) told me: “Hyperdrive is a huge leap forward in showing this industry how to keep production crews safe without having to compromise content.” 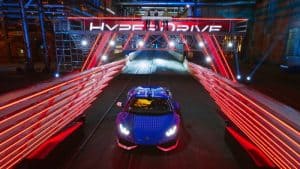 ‘Hyperdrive’ Is the Best Netflix Show You’re Not Yet Watching

A preface: I am not a “car person,” I have no desire to drive a car, much less race one, and I don’t think I’ve ever paid full attention to a single Fast and the Furious movie. And yet—yet!—I’m obsessed with Hyperdrive, Netflix’s absurd hybrid of American Ninja Warrior and The Fast and the Furious: Tokyo Drift, the car show to woo non-car people, and the best competition show you’re not yet watching. 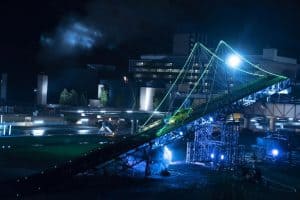 Netflix’s Hyperdrive Is American Ninja Warrior With Cars. Because Why the Hell Not?

This is truly the algorithm at its finest. Sometimes, when I can’t sleep at night—haunted by the state of our country, or the Cats trailer—I lie back and wonder how Netflix’s algorithm works. Is it a supercomputer that feeds from and studies our guiltiest viewing habits, and mashes it into something new? Or is there an oversized red button buried deep underground Netflix HQ that the humans press when they run out of ideas? 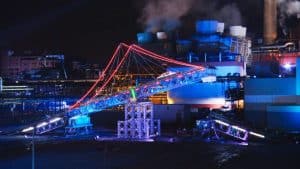 Blend race-car drivers with an “American Ninja Warrior”-style obstacle course and you’ll come up with a new Netflix series packed with horsepower.

“Hyperdrive,” now streaming, features drivers from around the world testing their skills and putting their own cars through a series of challenges, including a six-story-tall contraption called the Leveler. Actress and car enthusiast Charlize Theron is an executive producer of the series. 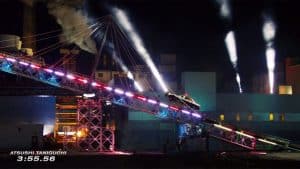 Netflix’s ‘Hyperdrive’ is the craziest car show on TV

Netflix’s new competition show ‘Hyperdrive’ pits drivers against an outrageous obstacle course that looks like something from a videogame.

“Hyperdrive” was almost inevitable. Netflix’s new series combines drifting and video games with a fitness ninja-style obstacle course to create a motorsports competition that was tailor-made for TV. 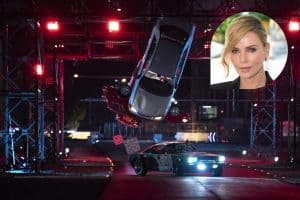 When we set out to make Hyperdrive I knew as a producer that I had to pull together a group of automotive consultants with impeccable skills… people at the top of their game.

No one had pulled off anything like this other than stunt drivers on incredibly controlled sections of road. It took almost a year but we found the people who needed to be in that room, and one of the first, was Martyn Thake.

His record of building tracks in unique locations around the world was second to none, and his thirty years of experience with high speed precision driving made him and MCS the perfect partner for our show.

The logistics, perils and problems of protecting our cast and crew in this bold endeavor never stopped coming for the 2 years it took to make Hyperdrive, and without Martyn and MCS to help find the solutions, our show likely never would of made the light of day.

If you want to move cars fast, point a camera at it and keep everyone safe, than call Martyn and the team at MCS.

I have known Martyn Thake for over 20 years and have worked with him on premiere racing series and entertainment shows. In 2018, Martyn & I collaborated on the Netflix Series “Hyperdrive”. Hyperdrive was a one of a kind, 10-episode series that featured cars drifting and handling obstacles at high speed. There was a very large crew that required a lot of planning and strategizing on how to make the courses exciting, perilous and safe.

Martyn's past experiences and dedication to safety made the building, paving, testing phase and principal photography, that lasted 21 days, a successful and safe experience for the teams, drivers and crew of over 100 people.

Martyn not only handled the on-track safety but was also involved in all of the planning stages that the show required to be successful and safe. He was the lead on all safety issues that involved the cars, drivers, production team and track. His work was paramount for the whole production to be safe and exciting.

Hyperdrive set out to change the way the audience views racing as sport. Drivers compete in an arena that had never been seen before because nobody else would dare take on such a challenge.

Our team set out to push the limits of what could be done and it would have never been possible without Martyn Thake and MCS.

Martyn’s experience in the arenas of track design, implementation and safety were paramount to our success on the project. Martyn designed a series of intensely challenging tracks within the confines of a working facility. He and his team had the nail-biting task of protecting the drivers, the crew and the historic property at the original Kodak facility in Rochester, NY.

Martyn is incredible to work with and was helpful in finding creative solutions to the needs of the show; but he is is also no-nonsense. Safety was paramount on set and his rules - once set - were not negotiable. Our safety record was a tribute to his unique and valuable skillset.

I had the pleasure working with Martyn in 2018 on the largest competition car show ever produced — Hyperdrive (Netflix).

We had an immense challenge of designing and building a 120+ acre race track, with state of the art elements and lighting, while trying to maintain a safe and efficient work setting to allow our camera teams to operate for television purposes and establish an infrastructure required to support all the race teams and mechanical needs.

On a daily basis, we had to re-design the track and re-locate barriers. Martyn was integral in the entire operation, guiding both our creative and production teams, and ensuring all safety protocols and procedures were in place with every new track design.

His vast knowledge of auto racing and vendors was crucial in helping us also source our needed track materials and support, and effectively established a highly professional team and emergency extraction system on a grand prix level.

Martyn also helped to manage the budget and timeline for the track build, and kept our show on budget, while juggling the rigorous demands of production and creative. On top of all his professional skills and knowledge, he's truly a pleasure to work with and always has a problem-solving approach and positive attitude.

Any production of large scale or small would greatly benefit from his services and will ultimately be thrilled with the results.

When I was first asked to be part of the Hyperdrive team as one of its production designers, and fully embraced the “epic in scale” project we were about to conquer, I had a lot of questions, mostly about safety.

That was the same day I met Martyn Thake sitting at a table across from me at one of our many think tank discussions that went on for a better part of a year before we filmed our show. Martyn became an integral part of how we approached designing the custom tracks that needed branded barriers, lighted directional signs, launch sequence structures, props, and many other scenic related items we designed to both lead the contestants thru our courses but gave Hyperdrive its Identity.

The course was over 120 acres and every inch of that had to have safe branded scenic items that provided framework and backgrounds for camera. My talents are making things look good on camera and something that looks amazing and something that is safe are two different things.

Fused with Martyn's experience of performance vehicles traveling at high speeds and methods of how to keep drivers on a course, I was educated on how these essential scenic and lighting pieces could co-exist with the drivers and they're race machines.

Martyn takes his role on the team very seriously and has many years of experience both in the race world and now in film. Martyn is very much a collaborator and always found a way to help me not have to sacrifice any of the esthetic goals.

MCS and Martyn Thake are your Film, TV show, or Corporate Event solution to a safe and successful production.